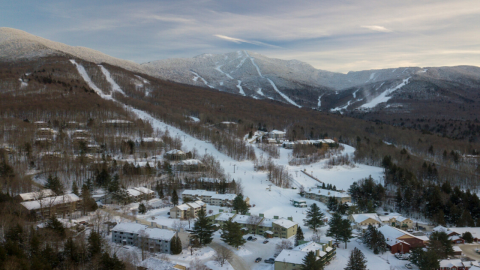 Vermont has a long history of resort development dating back to the 1800s when healing spas were widely advertised.  Today, resort development offers year-round activities from skiing and snowboarding to downhill mountain biking and all-terrain vehicles. But resort development also comes with challenges both for our land use planning and our ecology as development is proposed for sensitive mountaintops and headwaters. In this half-day trip participants will visit the Stowe resort and take the gondola to the top of Mount Mansfield with panoramic views from VT's highest peak. Be prepared for a small amount of hiking at the summit (Potentially rugged weather conditions and uneven walking surfaces).

–Strafford Nordic Center has its base lodge and trailhead located at Rockbottom Farm, a working organic dairy farm and home of the Strafford Organic Creamery

–Smugglers’ Notch is where you’ll find the only triple black diamond trail in the East, aptly named The Black Hole

–Pico Mountain’s Otter Ski Patrol—the oldest registered ski patrol in the nation—began at  in 1937 when the ski area first opened. The Otter Ski Patrol was later folded into the Killington Volunteer Ski Patrol

–Mad River Glen, home to the iconic single chair, is the only ski area in the nation on the National Register of Historic Places

Vermont led the Northeast in 2015-16, with about $595 million in economic impact from the ski industry

Ski resorts in VT, as in other places, cause habitat loss and fragmentation and can cause local declines in wildlife populations

In a meta-analysis of studies of winter resorts, richness, abundance and diversity of fauna were lower in areas affected by winter recreation when compared with undisturbed areas