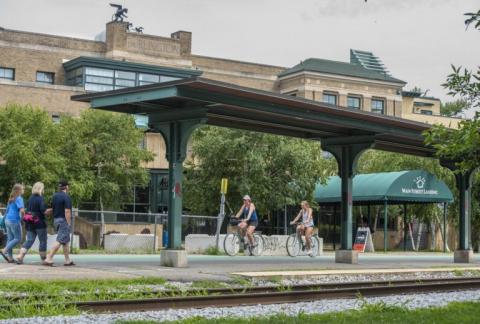 In this half-day walking tour around Burlington, participants will meet with city planners and Department of Public Works professionals to learn more about the City's efforts to invest in bike/ pedestrian infrastructure and utilize rail that brings freight and passenger service into our city center.  We'll see the City's railyard and train station that now connects Burlington with New York City and Montreal (with a bus connection) as well as our bike network and other planning efforts. Participants should expect to walk for about 2 miles on city sidewalks.

The Champlain Canal opened in 1823, connecting Lake Champlain to New York’s Hudson River. By the mid 1800s, the city was the third largest lumber port in the nation.

The University of Vermont, founded in 1791, declared support for freedom of religion in its charter, making it the first institution of higher learning to do so. It was also one of the first universities to admit female students, in 1871.

The Church Street Marketplace, Burlington’s busy pedestrian shopping walk, was inspired by a market in Copenhagen called the Stroget.

The Fletcher Free Library, established in 1871, lets residents check out gardening tools in addition to books, CDs, and DVDs.

Every summer, Burlington hosts the Festival of Fools, an event dedicated to “the age-old tradition of busking”

It was the site of the world’s first international hockey match, in 1886

Bernie Sanders was mayor of Burlington for 4 consecutive terms, between 1981 and 1989

The band Phish formed at the University of Vermont in 1983.

According to a recent assessment, 30% of the traffic in downtown Burlington is comprised of drivers searching for parking.

It’s one of the most environmentally progressive cities in the nation. Earlier this year, Burlington became the first city to source 100% of its residential energy from renewable sources.